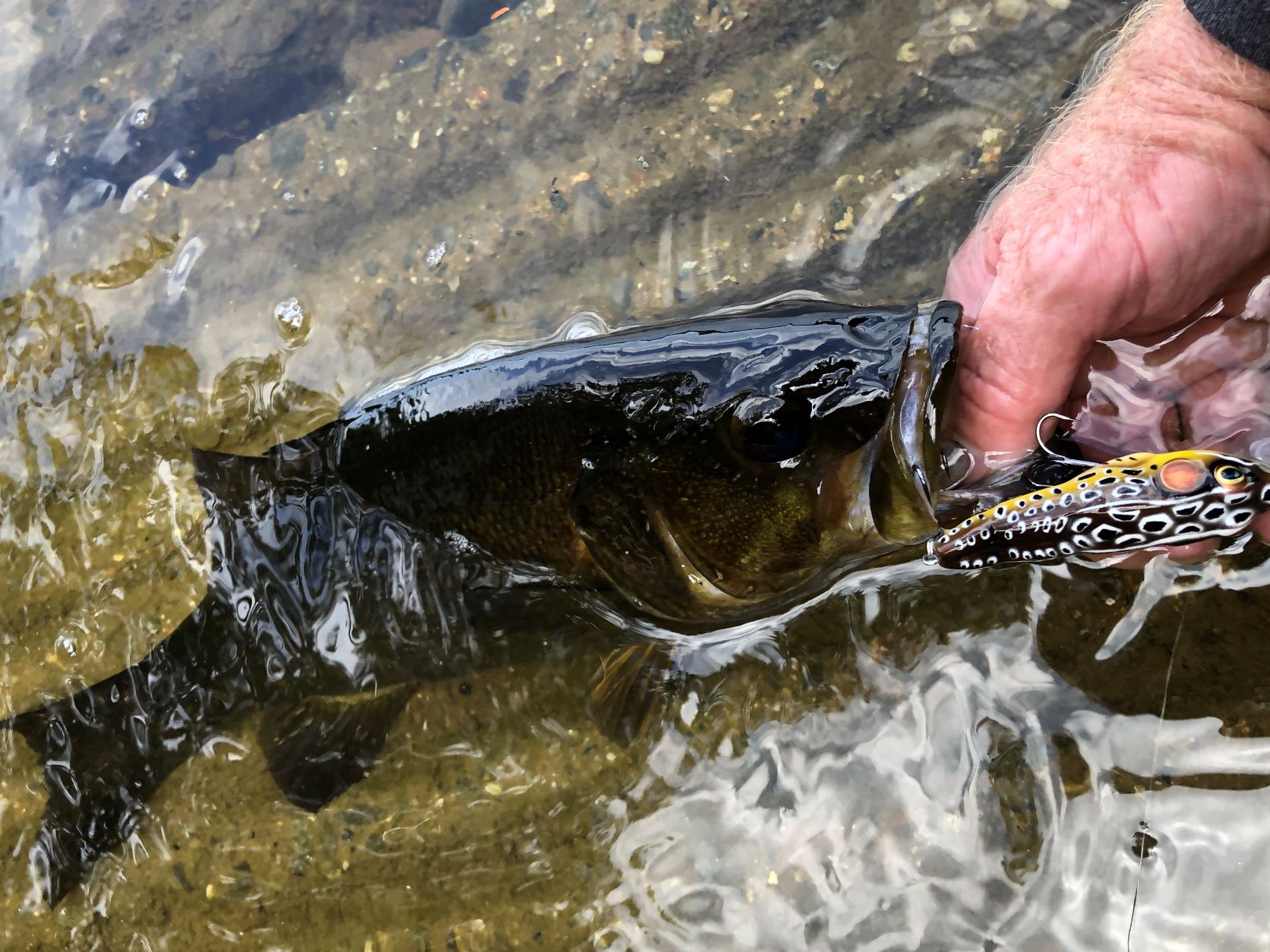 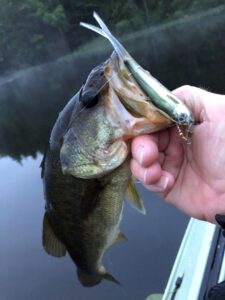 Fishing Through Rain and Frustrations

There exist few joys quite like paddling from a kayak seat overrun with warm lake water while rain cascades off a jacket visor, soaking your crotch. Fishing in Maine-ly rains means you just never know what’s in store. I planned for five days in northern Maine to erase mid-summer frustrations: the crush of town-sponsored tourism, endless traffic and two months of drought forcing me to stealthily water a garden like some common criminal protecting heirloom tomatoes. As my previously waterproof pants began to fail, an early August chill raced up my back. Turning east, into a ten knot wind, three rods were already tight with wind knots. My glasses were awash, I struggled to keep the boat steady while a dozen Z-Man plastics floated freely under my knees but nothing would keep me from fishing. Fortunately, the heaviest rains held off until I was a half mile off the dock.

“We’ll have thunder and rain showers, some heavy, rolling through northern counties with temps in the mid-sixties and clear skies, high humidity and temps in the mid-eighties in the southern portion.” Maine meteorologists prognosticate in welcome generalities. Done, onto local sports. In Rhode Island, we sit through detailed forecasts for towns three miles apart and with respect, frequently prove to be unreliable. Driving north, an app projected three days of rain but it hadn’t rained on the lake since I visited in late June. Fishing in the rain can be bold, foolish or occasionally wildly successful. I took the risk. Fishing in Maine-ly rains you need have some stones and just get over yourself.

The next day was 91°. Mandy and Jeff DeBuigne and I broiled beneath a Penobscot River bridge, casting for smallmouth. They fished an Al’s Goldfish, I chose a Z-Man Darter Z in Houdini pattern with their Willowvibe bladed Jigheads. The ¼ ounce head perfectly counterbalanced the buoyant plastic, allowing the presentation to bounce along, kicking up silty puffs. My first might have been a personal best but in 78° water, she went overboard without a photo op. We moved to a small pond but there was no escaping the sun. Jeff bailed out for a swim, Mandy paddled for shade. We surrendered to the heat. 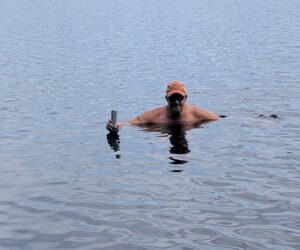 Jeff BeBuigne, smarter than the rest

Later, watching everything as a murky sun faded into a hemlock forest, a mature pair of loons with a single loonlet patrolled the lake steadily, understanding what was blossoming a hundred miles west. Dylan was right about weathermen. They left long v-shaped rolling wakes as they dove for fish. That night, motionless on my sleeping bag, sweat seeped from my pores. August in northern Maine: sunscreen and bug spray, magical and brutal. Around midnight an easterly breeze arrived with rolling thunder careening off mountains, echoing through valleys. As lightning wrestled with darkness, I rose to watch water reflect original fireworks. Counting seconds between both, I whispered, “two” before skies exploded. Everything shook as bolts illuminated cracks between hundred year old logs. Then came the sound of an animal, something clawing for me. Inching silently onto a wet porch, I smiled with relief at the sound of boats rocking against the dock, not some crazed Windigo moving in for a kill.

Dylan was right about rain and weather

“You have to be kidding me,” I thought. It was 5am and raining. Temperatures had fallen twenty-five degrees. Fishing in Maine-ly rains, I kept thinking. I zippered the bag to my chin. By noon it was torrential. I considered lighting the woodstove, skipped lunch and went fishing. Holding under lean, shrugging timbers and over submerged shaggy logs, largemouth hit LIVE TARGET Twitch Minnows on weedless hooks. Every fish sprayed water in my face. At four, I hauled my kayak ashore under some sagging white pines. The loons were gone. They knew far more than us. 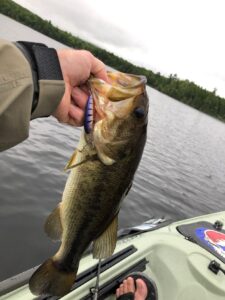 After supper, I went fishing in lighter rain and wind. The first big bass fell for a Northland Fishing Tackle Rumble Bug in 12’ of water, followed by three more. Moving to a small cove where water seeps in from deep woods, I tied on a Minnow to mimic bait washing downstream. Three more bass up to three pounds came to the boat. I paddled cautiously west to another inlet as rain overflowed my seat. Even 75 yards from a small dam, fish hit the Minnow, Rumble Bug and Z-Man Houdini’s carefully bounced along the center where there rests slightly less sunken timber. By 9:30 pm, five more bass were landed, four were lost, all three rods were a disaster of twisters and fractured hardware. With no ease in the rain and no lamp, I paddled a mile towards two small, distant lights, praying one was camp. 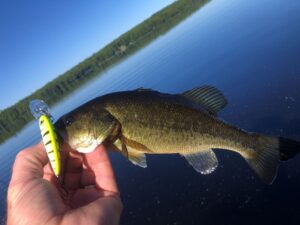 3 am. Rain slammed the roof like bricks. It was dark as a pocket. In sweatpants and raincoat, I trudged to the dock, laid a tarp over my kayak, secured a hatch and slogged back up slick grass. Safely back in my bag, ignoring wet legs and hair, I closed my eyes. Plop. Plop. Plop. Water fell steadily from the ceiling onto a pillow next to my head. After positioning a towel, rain pooled on its surface, no matter how much I prayed or swore, then splashed my cheeks.

“All the real rain is in Millinocket, you should be good,” a friend told me a few hours later. So I went fishing. 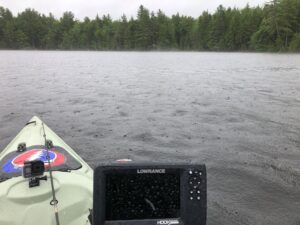 Halfway across the lake, closing my eyes to feel sheets of warm air drifting from some white pines, skies opened with a cloudburst, shoving me into a cove I intended to explore, just not that day or at five knots. Two more decent bass fell for a blue over silver popper before I tucked into a submerged grass field. Resting along the shoreline, wondering if I packed a wool hat jacket, I picked enough wild blueberries to sweeten a breakfast, landed a solid three pounder then lost one larger who brilliantly turned my kayak around, only to ditch me in a twist of Lilly pads.

Turning for the cabin, saturated, a torrent unloaded on my hood. Stiff gusts drove me back tight into the blueberries. With two rods tangled in a low bush thicket, I lost sight of camp and, thankfully but not surprisingly, all those mid-summer frustrations. 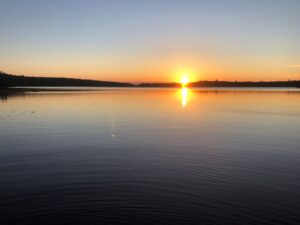 Alas, there is always hope for a new day