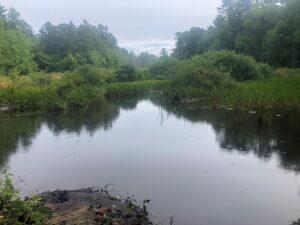 Looking up the Flat River before the stones fell

This whole dam thing began a few hundred years ago, when waves of European immigrants settled on top of indigenous people’s land and introduced capitalism. And smallpox, but that’s for another time. They took land, ignored the value of gifts over economies, cleared old growth forests, laughed off planting three sisters in luxuriant, supportive soils and dammed damned near anything that flowed. Crafty colonialists stacked logs, rocks and blocks to control rivers to turn wheels to weave cotton to dye cloth to accumulate cash. Many dams are still functioning, albeit forgotten or ignored and while maples and alders stake claim to sodden land above them, these low revolutionary monuments continue to impede trout movement, warm waters and impair downstream habitats. Thankfully, we are warming to the idea that it’s time to remove dams and restore fish passage. Enter Trout Unlimited and Rhode Island’s Flat River.

RI still has far too many dams standing, impeding, impounding

“If you know where the barriers and cold water are, can we make a plan to improve connectivity?” President and CEO of Trout Unlimited Chris Wood asked, standing by the Flat in 2019. 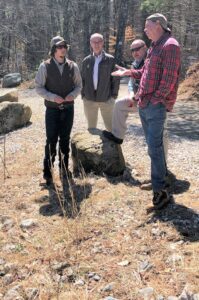 Colonial-era dams harnessed water for crops, livestock, fish and power. Power over darkness, power over nature. Those stones slowed flows and erased migrations on rivers throughout New England and beyond. Trapped trout moved to cool pools but a few August’s later, such torpid, tepid refuges proved terminal for magnificent cold water fishes. Per RIDEM’s own assessment, there remains approximately 674 dams impounding Rhode Island waters; a significant number are archaic relics and need to be torn away. TU has logically, passionately advocated for selective dam removal, a Herculean task considering ownership, abandonment and liabilities. 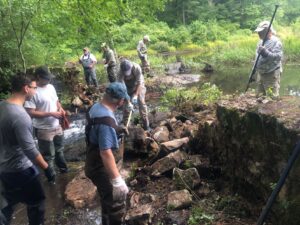 RI’s Flat River is pretty, special yet not so different than other impounded trout waters

“This is a really big project and a very long day,” warns Glenn Place, President of Rhode Island’s TU chapter 225 as the Flat River etches its way through the Arcadia Management Area. Steady rain plunks off everything. RIDEM Biologist Corey Pelletier swings his arm to show two dozen volunteers and interns on how they will methodically cut a dam off at its knees, with sledgehammers. Tools assembled, waders donned and boots secured by the best dressed group of volunteers ever to remove a dam, or engage in stream channel realignment to be more proper, and everyone find a spot of dusky, slow water, chatting about sediment movement, flow potentials, thermal refuges, connectivity. Excitement is palpable and rising. Under burly clouds, woven snugly with plate sized poison ivy leaves, guarded by ring neck snakes, stones fall from a Civilian Conservation Corps labor project and there’s no going back. 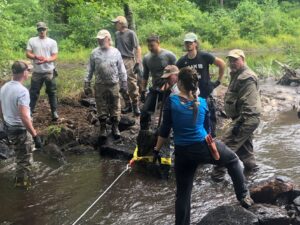 It was muddy and fine work on the Flat River

“Just be patient, let everything be,” Corey says, directing from atop a loose assemblage of freshly chewed alder branches, gesturing to his pre-established river bottom depth, a calculation he made to ensure even flows with upstream levels. “There’s a lot of deposition behind it,” he adds, which he wants the Flat to carry downstream at its own pace, which might take a year or more, which is part of the healing. Healing is a lengthy, sinuous process where often our best involvement is not being involved. “This is so cool!” Chris Wood says with a laugh.

In fairness, the stone wall was really quite beautiful. Clean lines, tight corners, still level top with a lush skin of damp green mosses, it stood straight and strong, reflecting an old school hard work ethic. It might be one hundred years since laborers stacked and measured to impound this particular, pretty river. Its obvious destruction of fish habitat and movement were considered fair market prices to pay for watering goats, cows and potatoes but we are wiser now. 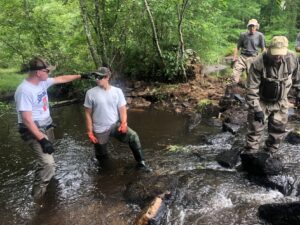 “This is the culmination of our work with Rhode Island Department of Environmental Management on our Embrace-A-Stream grant from 2017,” Glenn said.  “We did a habitat assessment of the Upper Wood River watershed, including temperature monitoring. This impoundment was identified as not only a barrier for fish passage on the Flat River, but a “thermal polluter”, raising the discharge temperature of the water from the impoundment as much as 10 degrees in the warmest of summer months.” Thanks to Glenn’s persistence and the passions of Trout Unlimited, fish finally have a concrete chance of survival in their own watershed. 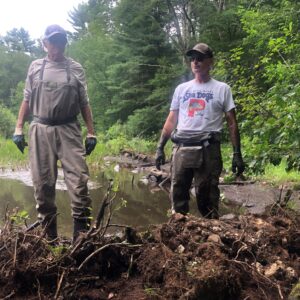 “I really don’t think this will take as long as they thought,” someone in muddy waders said, weaving a bright yellow 3” strap around pry bars to secure a substantial stone. A tall white pine 60’ behind them held the Grip Hoist. Purchased in part with a grant from the Wild and Scenic Rivers Council, it works like a come-a-long when  cranked to slowly remove rocks too large for largely retirement age volunteers to muscle along. It moves in increments of inches while all the while, water flows. For hours, rocks were pried, rolled, hauled and tossed into heaps near opposing banks. There were occasional breaks for hydration, Tylenol and striped bass reports but work was always steady. Then someone evicted a muddy rectangle, exposing a half dozen dark, scattering hellgrammites. Like the proverbial pretty girl passing a construction site, everyone leaned on pry bars to leer and whistle. At bugs. “This is so cool,” Chris said, craning over someone’s shoulder to see bugs.

“The whole thing is going to go,” Jeff Perry yells as an unbroken chain of volunteers tears loose a four foot lump of stone and cement. The river is different already, thankfully, peacefully. Upstream is draining, alder roots are emerging, an ancient stream is flowing freely. Uprooted stones show black and tan lines from a century partially submerged. TU volunteers pause only to watch the Flat River flow. 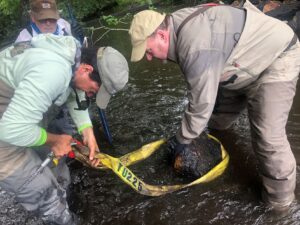 Chris, Glenn and Corey surveyed a collective success as volunteers shuffled home. Sixteen feet of wall was removed to ensure a thirty foot wide release, allowing the Flat to grow over time. It was already inching wider, accelerating gradually. Corey noticed a fleeting shadow as a single spectacular brook trout darted downstream. Rain splashed on wilting ivy. Native bluegills finned in new shallows. Everyone stood in water, because that’s what anglers do. The land was nearly silent, save for sounds of busy water carrying tannin stained leaves and bits of thin alder bark downstream, flowing over silt and gravel it had not washed in thirty generations of wild, native brook trout. On the Flat River. 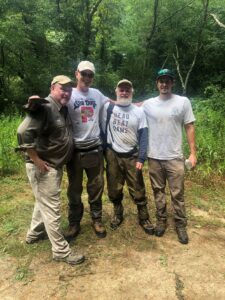