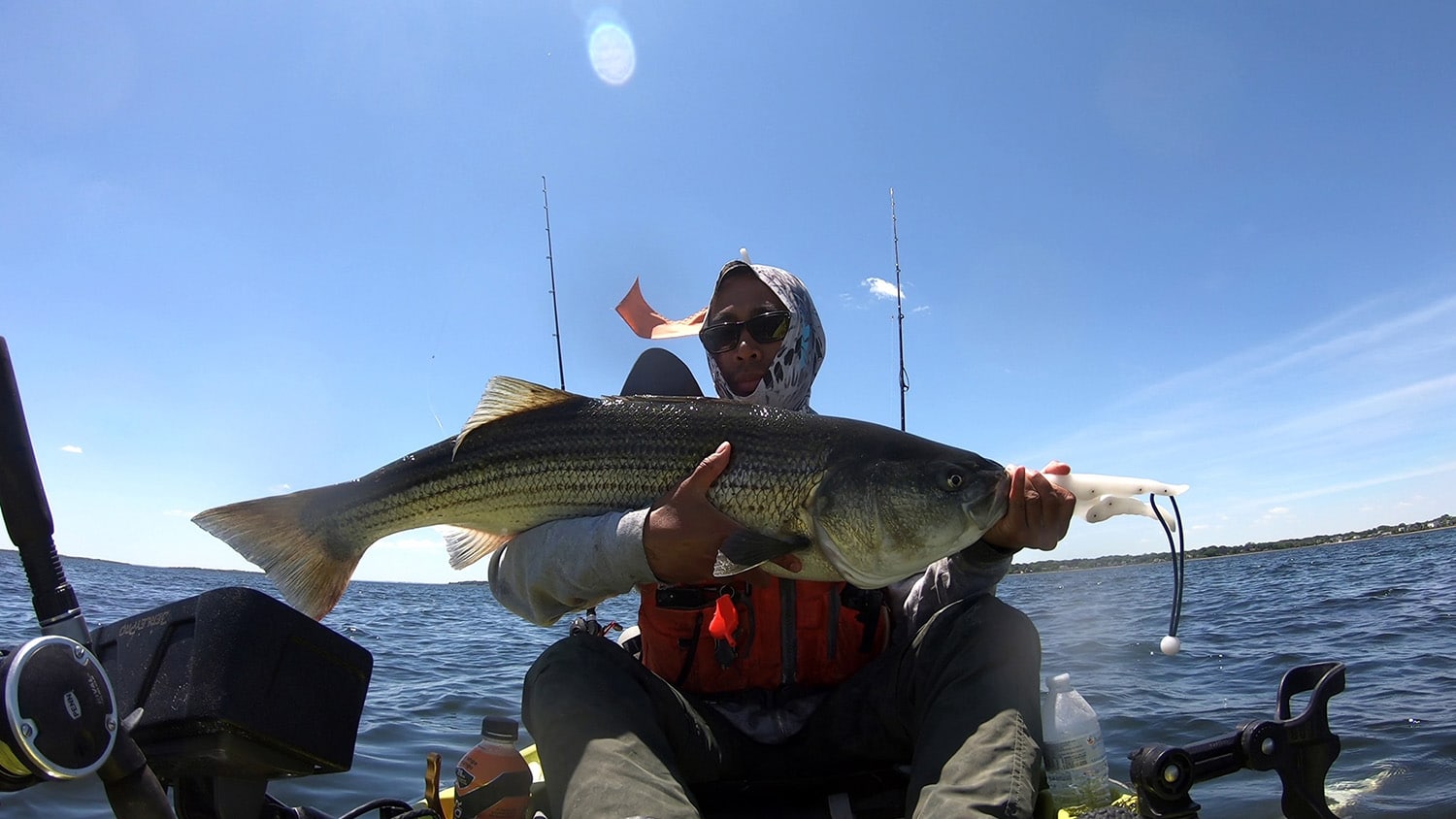 Some of our favorite Fish Wrap stories involve parents being outdoors with their children, carrying on traditions or teaching their next-generation how amazing Nature and water can be. This week we are reminded how supremely fortunate to live where we live and having our kids around more makes it all the better. At the tail end of a slow-starting striper season that’s now in full swing, we get to hear from Thom Houde, Noe Phommorath, Todd Treonze, Dave and Sophia Garzoli and John Brierley and they all have something to tell us.

Reports from the Narragansett Bay kayak fleet have been pretty positive that sizes of striped bass are increasing, thankfully. Thom Houde and Noe Phommarath launched into a stiff Saturday north wind to finally find some big bass, which is no big deal for those two; they are out hours ahead of the rest of us.

Noe was back a few days later, under a hot noontime sun in just 15 feet of water to find a whipper of a big striper. All wrapped up in his sun buff, glasses and hat, he looked like Jonah holding the whale in his arms, before releasing it, of course. Those two not only catch lots of fish, but they also offer up lots of tips and counsel. Todd Treonze is a Connecticut fisherman perfectly fitted in his kayak with a soft spot for Newport. If you don’t follow Todd on social media, you probably should since dates on a calendar mean nothing to him when it comes to fishing and catching in all weather and water temperatures. It was Thom and Noe who helped him figure out the tube and worm deal to catch big stripers this week. And Todd has respect for the fishery so he’ll share just as many pictures of his catches as releases. He learned from Thom that carrying a beat-up old Styrofoam box of fresh sea worms will absolutely be the difference between a story from last year and one that starts with “Hey, look at the cow I just released.”

Dave Garzoli has been finding some decent sized striped bass along the East Passage of Narragansett Bay. Then he landed one bigger than our new slot limit so he had an inkling he was onto something. Dave took his teenage daughter Sophia fishing along Barrington Beach. “We were soaking bunker chunks. She picked up a few nice bluefish just before slack tide.” That’s all good but Dave knew there was big bass around and his daughter is no slouch with a fishing rod. Sophia was the RI Saltwater Anglers Association Junior Angler of the year in 2016 after all, so she knows such pursuits require time, patience and appreciation of the water, which are all lessons we try to teach our children. “As soon as the tide flipped she was fighting this nice fish,” Dave said. “She had to chase the fish down the beach a way. We ended up being a good distance from our ruler and tagging supplies so we just released it. I would estimate Sophia’s fish to tape out around 36″ as well. We didn’t get a measurement but it was easily her biggest fish to date.”

He knows those two have lots more days and nights together chasing fish and maybe being pulled down a dark beach with only a camera and a giant smile. These may be strange times but how fun for a father and daughter to hoist a fish like that, then set it free? Cheers to you both.

The cod bite has slowed out on Coxes, which is natural but there are still a few stubborn cod hanging around Newport which is where a northern kingfish was just landed. They aren’t terribly rare around here, although current water temperatures are on the low end of their comfort range. Kingfish are related to red and black drums, spotted sea trout and Atlantic croaker.

Their natural range starts in Carolina’s and extends to the Gulf of Maine but in reality, they tend to swim only as far north as the evil empire state. They taste similar to whiting, likely because they feed on sandy stretches, hunting for crabs, shrimps, crustaceans and squid. If you decide to catch a few, squid strips in 15 feet or so of water will be your best bet.

Finally, this week, if you’re headed to the Cape to fish the ditch, remember regulators have banned commercial fishing there and environmental police are patrolling to ensure recreational anglers abide by all the rules. After so many years of strong fish runs through the canal soured by poaching and greed, lots of good folks want balance restored. One fish in the slot limit per day, period. Looks like there is a solid black sea bass bite outside the canal as well. RI Saltwater Anglers Association member John Brierly has seen lots of them averaging 18” around the west side of the canal.

He’s been looking for stripers with SP Minnows and Spro jigs but keeps coming up with sea bass, which is not a bad thing. If you need a change of venue, maybe take John’s advice and fish the ditch, take Thom and Noe’s advice to release your catch and take Dave’s advice to take a kid fishing.

We are supremely fortunate.

How Do You Value Opening Day? Is this day for fishing stocked ponds, stringers and bacon? Is it for an overdue hour on a rolling river with the hopes of possibly finding some wild brookies? Or is it a wash because you just want to fish for something? There is great value in everything so we ask, what do you value the most?

Clouds on the horizon and a few big ones in the mirror mean fishing can be fickle but a few aces know where they feed. Ralph Craft has a few spots open for his Tog Tourney and CRMC wants to send you some mail to keep aware of how they are, we hope, protecting our shorelines.

Fish Wrap’s 2020 Year in Review of stripers, traditions, social lives, kayaks, tautog, squid, and David Latham. And the lucky bunch of us also ate some amazing blackberries. Even 2020 has positive memories and lessons to learn from.

Hot Reels wins it all, a fish bust & 5 million eggs. that’s a lot for one week

The 35th Annual Snug Harbor Marina Shark Tournament was another success. 47 boats registered with 7 women and a record of 8 kids signed up in the 15 and under division. By Saturday night’s weigh in, the leaders in the thresher category were Bull Dog, with a 225...
Keep Reading

Chief Hoxie speaks to RISAA and you should be there, especially you poachers

This month, as we start to say goodbye to green leaves, albies, most of the big striped bass, (don’t forget about the Pt. Judith lighthouse…) fluke, tautog, and just about every other fun saltwater fish, we welcome in bird and deer hunting, blaze orange vests and a...
Keep Reading