From a dusty baseball field in Coventry to a winding, shallow stream shaded with birch and white pines, fishermen, volunteers and scientists went searching for brook trout. In the 22 miles of mapped streams in the 8400 acre Big River Management Area, Rhode Island’s Trout Unlimited chapter joined forces with EA Engineering, US Fish and Wildlife Service, RIDEM, the RI Water Resources Board and Trout Unlimited National to record and study key environmental parameters, like water temperature, fish barriers and variety of species. RIDEM and Trout Unlimited are searching the Big River Management Area for cool water supporting brook trout seeking refuge from the sun. If brook trout, the state’s only native species, are to be protected with balanced regulations and conservation minded anglers, it all starts with data. 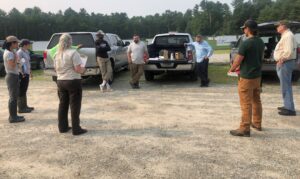 Many good days start in a parking lot, with coffee and donuts.

Sal DeCarli, Scientist and Project Manager with EA Engineering Science and Technology, Inc. spoke to a small group, offering coffee, donuts and bug spray on a hot July Tuesday. EA staff, interns and TU members have helped deploy 36 data loggers throughout the Area, while assessing conditions of culverts, detail observations of birds and other wildlife, record general usage of the area and gather information on macro invertebrates. No group is better suited to let bugs land on their arms so they might identify then match with a home tied fly, than TU members. Talk about a dream assignment.

Matching funds are helping find brook trout and other species

“The total project cost for this project is $179,962. TU requested and received $89,962 from the National Fish and Wildlife Foundation and will be matching that request with $90,000 from project partners and TU volunteer time,” said RITU President, Glenn Place. Sal said they hoped to find brookies up to about ten or twelve inches in length to, “Supplement data collection we’re already doing out there.” Some parts of the management area are deep woods, some are frequently visited, some are unfortunate dumpsites. “A lot of people come out and dump their trash here, not knowing it’s potentially their drinking water,” Sal said, shrugging his shoulders.

We followed Corey Pelletier, Fisheries Biologist with RIDEM’s Fish and Wildlife Division, to the edge of Capwell Mill Pond, where a tired rock dam allows 75° water to tumble onto a granite base then begin its sinuous run to Big River.

“Ok, I’m going to test this,” Corey said, suiting up his Smith-Root electrofishing backpack, then offered some training on how to correctly manage a stream survey with a bit of personal experience. “It’s instinct to reach down into the water. Avoid that,” he said with a smile. We likely all had the same image in our heads of reaching for that first fish without gloves. With 350 volts emanating from the wire circle at the end of the sweeping anode, a setting Corey chose because the streams low conductivity, one reminder was enough.

Corey will slip his hat a little lower to go about gathering data like a true casual professional, but he may have done more to advance the cause of brook trout significance in the last few years than anyone might have imagined possible. We need biologists who know water and fishes not just from books or labs, but from loving them also. 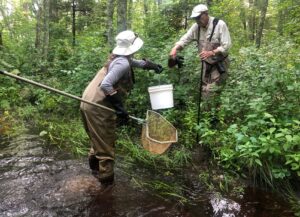 “We’re not going to feel anything, right?” asked Catherine Maxwell, Environmental Engineer with EA, stepping carefully around rocks, limbs and the occasional spider the size of a softball. Provided everyone wore rubber gloves and stayed clear of the five foot electric radius, there was little danger and fish recover quickly.

TU member Rich Benson moved specifically over wilted skunk cabbage and mushrooms tipping to a compost rich earth, carrying a bucket, gloves, spirits of volunteerism, curiosity and wisely, his wading staff. Rich is a little tight in the knees, aware that summer’s slippery slopes leading a banks green edge might take an extra moment to navigate, so he pauses, allowing a nimble crew to move ahead. Trout Unlimited’s success in protecting cold water fishes comes from collective labors of its members, like Rich, no matter the ache in bone or speed of movement. Rich’s role was no less important this day than was Corey’s.

“A lot of rivers, they get so warm from all the impoundments,” Corey said. Part of the survey is to identify and eventually remove abandoned or unnecessary dams, often relics of lost industries or personal needs of sport or agriculture. “Wait, here’s something, straight down,” Corey announced. Electroshocking stuns animals inside its tight radius so they can be scooped up with a net, placed in a five gallon bucket then measured. That’s where the data begins. First came a sunny, then a pumpkinseed. The real action started when they neared a bridge where EA engineer Frank Postma, deftly scooped up a 15” largemouth. 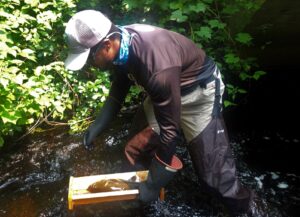 At the dam, one hundred yards from where they started, EA intern Quincy Milton placed fish on a measuring board as Corey skillfully pointed out distinguishing marks to identify bluegills and pumpkinseeds. Corey said, “Pumpkinseeds look different everywhere you go,” referring to their wonderful ability to colorfully adapt to new surroundings. Quincy measured bluegills at 15, 13 and seven centimeters, Yellow perch at 13 and 11 centimeters, Chain pickerel at 11 centimeters and a pretty pumpkinseed at eight cm, making them all roughly four to five inches.

An hour later, deep in the woods near Route 95, the team again measured out one hundred yards of a slightly more clear but winding shallow stream. Some reaches were only ankle deep, lined with Cinnamon and Imperial ferns. It seemed impossible for fish to survive in such skinny water. Rain water clung to cupped leaves, intricate spider webs shined in fractions of overhead sun rays. 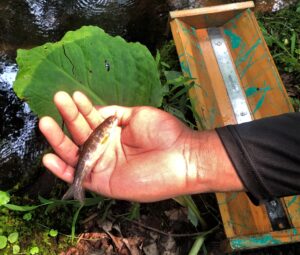 so small, so pretty

“Let’s keep pushing up to this one last hole, there’s a nice little riffle at the end,” Corey said. While the narrow stream seemed empty, save for a few water bugs, by that lasts push, Corey’s team had found four native, gorgeous, perfect brook trout. Three measured ten centimeters, just shy of four inches, one was a fraction smaller, making them likely one year old fish.

There is much work to be done in the Big River Management Area, and all over our state, to discover and protect brook trout in cold water. It seemed like a miracle to find such tiny treasures within a fielder’s throw of a busy highway. Sal, Corey, Rich, Quincy, Glenn, Catherine and others will keep walking small streams while filling in spreadsheets with wet hands, because it all starts with data. 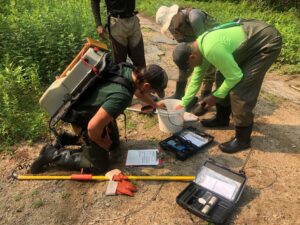 It all starts with data

Since getting off the couch was tricky on a recent holiday celebrating thankfulness and stuffing, it afforded me time to think. And thank. First of all, I’m thankful that I’m still here. Given my propensity for the occasional hoppy beverage and checking the “exercise”...
Keep Reading

The American Saltwater Guides Association took the regulatory tiger by the tail to protect striped bass. According to Peter Jenkins, they’re just getting started because they know, fish are worth more in the water than in a cooler.

RI Kayak Bassin’ is ready for a very big year

For months now, social media has been ablaze with posts about local fishermen getting their kayaks ready for a new fishing season. Despite winter being kind of a puffball affair and this Covid-19 affair making us rush out to buy toiler paper, which is absurd, unless...
Keep Reading