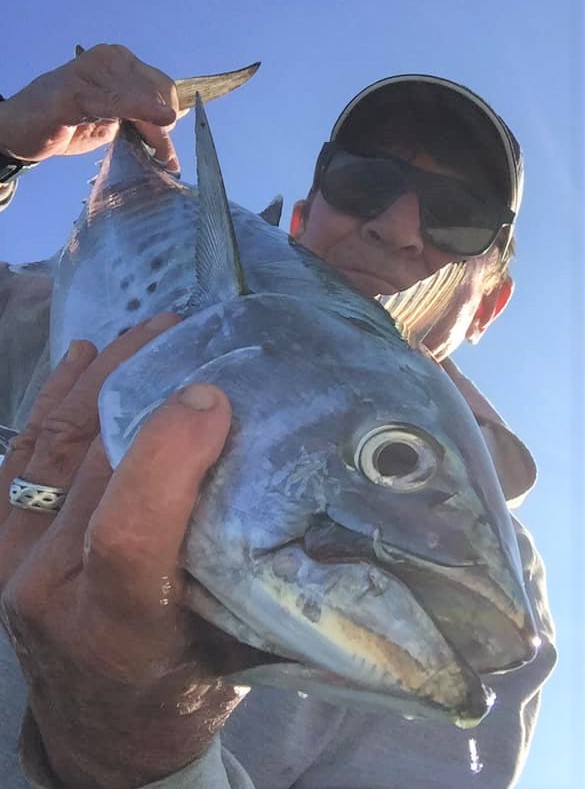 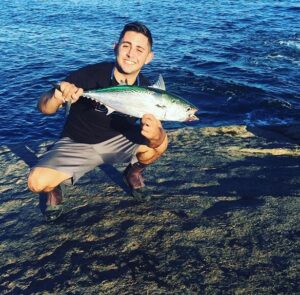 Sure, New England is striper country. Big battles, deep dives, frustrating vanishes and crazy obsessions for joining some elusive fifty-pounder sect make us love them. There swims, however, another summer love: more sleek, more finicky, more fleeting. Certainly some predators draw us to shores and gunwales at all hours but few draw us to a dark west wall with just a hope, after just a rumor about just a glimpse of a black sharp fin just out of sure sight. Indeed, few fish create such frenzy and frustration as Euthynnus alletteratus, the false albacore. Albies race in from offshore, torment and race off, often through a cycle of tides, often in just minutes, which is why we wait for them not knowing if they’re even there at all. False albacore, members of Team Scombridae, cousins of pretty bonitos, are worthy opponents and with a few skills and tools, are worthy of great New England sacrifice. To win this battle, you really must be all in for albies.

Go all in for the ultimate late summer reward

Float the idea of albies in certain circles. Heads turn. Stories of landed or lost will follow at increasing volumes because albies draw out deep inner fanaticism reminiscent of winter steelhead anglers who will sacrifice a frostbitten toe releasing a fish they spent an entire sick day hunting in wild waters. Bonita can be confused with bonito. Bonito are Sarda sarda, natives of the ancient Mediterranean island of Sardinia, family to the Scombridae’s, those other tunas and mackerel. Boasting perfect racing stripes broken intermittently by brushes of wide shadows over some magically iridescent skin, they also are marvels of nature. Bonito thrive from Nova Scotia to the Gulf of Mexico and many points east. 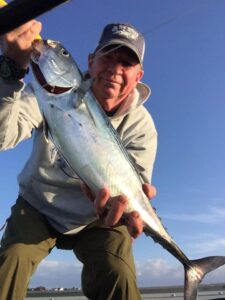 Pelagic predators native to pretty much the entire world, bonita are also members of the Scombridae family who blend in sweetly with dark spots scattered near gill plates and just below sharp dorsal fins with a splash of wavy lines over shimmering skin. Bearing more in common with mackerel than tuna, they are trophies, proof of Nature’s resilience when she is determined to perfect a hunting phenomenon capable of erasing any preys getaway plan and any angler’s photo session. 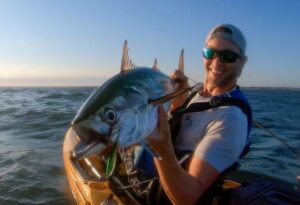 Alex Ridgeway, from his kayak, lands a gorgeous albie

At such speeds, you need shiny tins, epoxy jigs and flashy flies cast directly in front. Albies are built for straight line action. Captain Jack Sprengel of East Coast Charters makes time to tie everything directly because every detail matters, and that man knows how to catch. A tip from another fisherman I unfortunately don’t see much anymore, time and tide and all that, Captain Jerry Sparks, says that at such speeds, a bit of hardware flash means nothing. If you’re shooting a 7’ medium heavy with 20# braid and a 20# fluorocarbon leader from your kayak and the bite turns from bass to bonita, you may benefit from a 30# test snap swivel to keep you in the game.

Joe Baggs Resin jigs are key, as are classic epoxies from Hogy and EXO. The game is all about flash and speed and action and whichever color to which they are attracted, at that moment. They love sand eels so plastics which match their color changes and overall shape, like  Bill Hurley’s, are must-have’s. But each day’s light is different so carry a color card of options. Over the years, I’ve had good luck with Al’s Goldfish Lure Company’s Saltwater Series, not just because I’m a fan of the owners, but because that shiny backside and wounded wobble combine to attract the finickiest of albies cruising at high speed. You need a simple fish or sand eel shape fished at a rapid retrieve with a shot of color to turn a head. Simple, if only it were that simple. 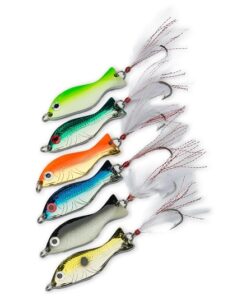 There is always a rub with albies…

Drawing off a conversation with Peter Jenkins of the Saltwater Edge in Middletown, he believes false albacore we see in close are small pods of much larger offshore schools. “This is the mind blowing piece,” Peter said. “They fill in from Niantic to Chatham all at the same time.” Consider that. Schools offshore are so large, these are just speeding slices peeling off for inshore feeding conditional to ideal conditions. Local pods seem to be smaller than those landed around the Mid-Atlantic. Locally, albies weigh around six to ten pounds but just a few hundred miles south, they are in the twelve to sixteen pound range. Peter recommends, “Surf Candies in various colors and a few Clousers to fall through the bait. Where there is a ton of small bait, throw a bigger fly,” he said, “like a four to five inch squid or a similarly sized Flatwing to imitate a snapper blue.” 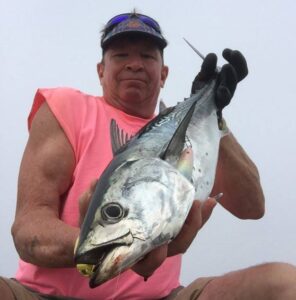 Lawrence Thompson, still on the fish

Pete Farrell, who runs his calendar and conversations around fly fishing for albies or any fish really, advise to have options. “Mushing off” he calls it. Day job? Sure. Family? Check. Albies? Well… Just mentioning them makes his speech louder and faster but he has a full fly box always. See, that’s the rub. You’ll need lots of options, patience, local intel and patterns to slow an albie. Some days it’s west wall easy, some days it’s 50 gallons spent looking for what was never there. When you find them, Peter Jenkins advises, “Understand there are often other predators feeding on the same bait ball. Albies are fast, their food is not. Use a slow retrieve.” When you release one, it’s nose first, like a football over the side. Good luck and enjoy the torment, it’s so worth it. 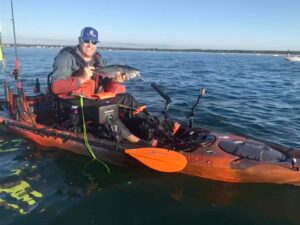