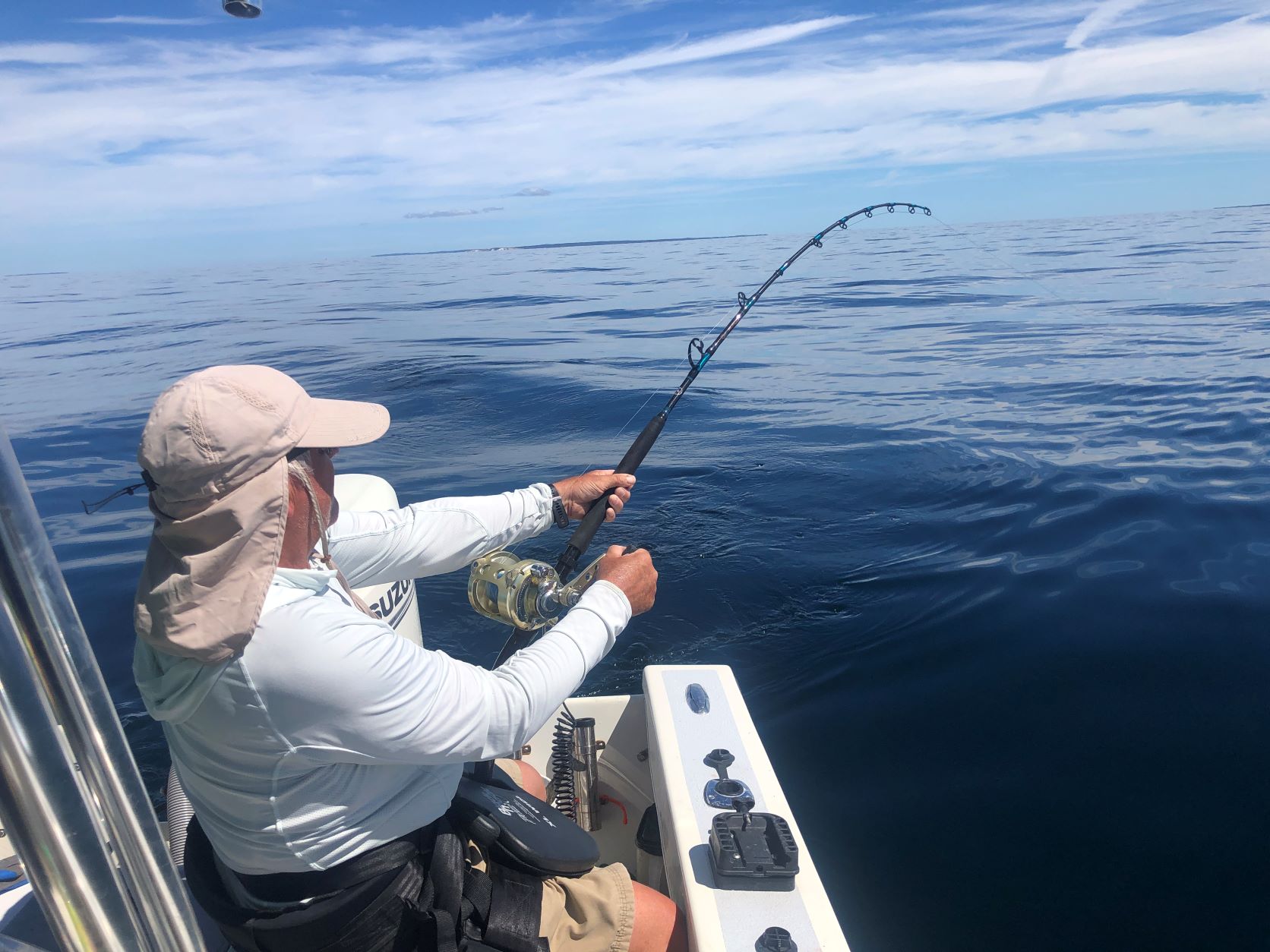 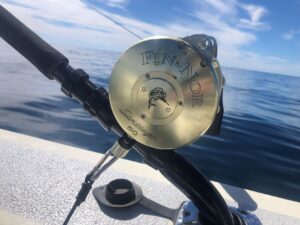 Greg Vespe, Dave Dube and Phil Duckett ran the pretty Miss Colleen, a twenty-foot boat with twenty-two rods, loaded with gas, food and gear, twenty miles offshore on a bluebird September day. Prepared for every species from choggies to codfish, their ultimate goal was to steam for an hour, set up shop in 70° waters, catch some dinner then pay out shark gear. Little did they know, Greg’s team of seasoned anglers would return home heavy with a very rare trophy. Team Heavy’s back to back threshers was simply unreal.

Phil and Greg had worked late the night before, rechecking tackle and weather forecasts. It’s no small operation to run that far. Challenges are many and even with fair winds greeting such magic as comes with a young summer day, adventures can always go sideways. Greg is an able captain who crafted his Swan Point center console from the keel up to be seaworthy, shy only for some extra toe space when she is tight with tackle and Twizzlers. Threshers are hard to find, two in a row is crazy

“She’s a little heavy,” Greg said, surveying a low water line, easing beneath the Claiborne Pell Bridge. Casting tins through bits of nervous bait scattered around a flotilla of yachts and tenders, they were soon steaming south then east at 125°.

Passing brief signs of life and two gorgeous but unfriendly Portuguese Man o War hydrozoa, they found good, hard bottom near a ledge where lobstermen moved in precise, open stern movements, each step choreographed for efficiency and safety, pulling trawls of wire traps from 20 fathoms. Dave shared egg sandwiches, then quietly went to work on her starboard side, reeling in sea bass and tautog while Greg wondered how things could be so different on the port side. Such is fishing.

“There we go,” Phil said, again, as he hauled in a hefty blackfish. Prized for their firm and flavorful meat, they were a welcome addition to the week’s menu. For the next few hours, Phil, Dave and Greg fished their groove with various striped and dotted Daiwa and Al’s jigs, adding to bait and dinner coolers. 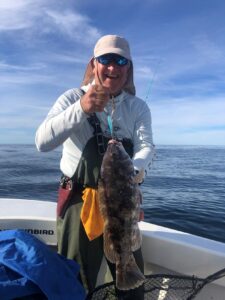 Phil Duckett with a fine tautog

“I’m snagged,” Dave said, surely fetched up on a rocky bottom. Just as he freed it, a rod to his right stopped hard, then moved, then stopped again. With some slow turns of the reel handle, up came a fine 22” codfish. 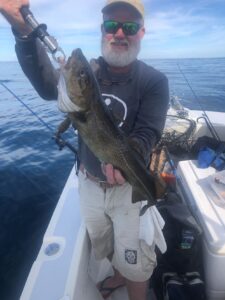 A few codfish were caught and released

Because of a previously discussed decision to help that wounded Gadus population along, she was thanked, kissed and returned. There was a noticeable silence. Then came a frigate mackerel, spinning up like a twisted jig: perfect shark bait.

At 11:15 am, Greg deployed baits and balloons behind a triple set of Fin Nor Santiago 50’s. The mackerel was rigged to sit 25’ deep, followed by another rig at 15’ then a deep set closer to the 100’ bottom from the forward starboard side. With an orange and a red balloon trailing behind on impossibly calm waters, Phil built a strong chum slick, based on Greg’s top secret chum sauce recipe, which just might have included some Italian seasoning, while Greg broke out his bait bat. 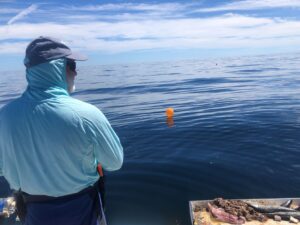 An ingenious version of an old school Benny’s toy, he had cut back the top to allow for a precise portion of chopped scup, choggie, mackerel, squid and bluefish. After an initial balk which landed on Dave’s head, Greg was tossing oily chum with fine precision towards the balloons. 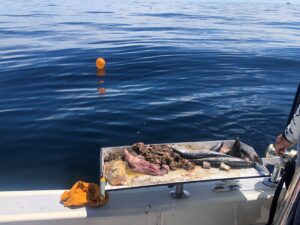 And all the while Dave was jigging up sea bass and tautog. 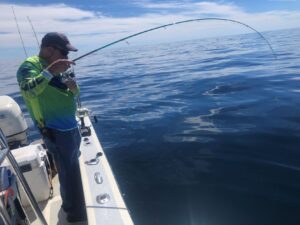 Greg Vespes Special Chum Sauce made all the difference

At 12:28, all hell broke loose. The mackerel rig exploded, the rod bent, the Fin Nor screamed, Greg yelled and everyone scrambled. Never have so many pricey rods and gear bags been tossed into a lumpy, ragged bow heap. Harnessed and snapped in, Phil settled into position to hold a sturdy Crafty One Customs rod from being ripped overboard. “There’s only three options,” Greg instructed. “Either it’s taking line, you’re gaining line or you’re tight.” For forty-five minutes Phil gave and gained line without ever seeing color or shape.

He pulled hard and steady, she rose then dropped like cement. While Dave kept Miss Colleen moving, Greg settled into the harness, to fight and keep her from getting near the boat while still green, speculating which species might be on the circle hook based strength, movement and stamina. A consummate fisherman, Greg is always considering his opponent and their potential to evade him. 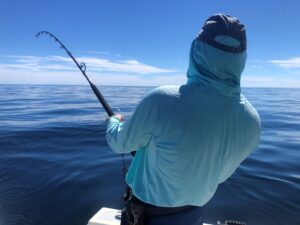 leaning in against the pull

Team Heavy’s Back To Back Thresher Sharks

Just before 2:00 pm, looking east at Gay Head, Greg retrieved enough mono to see leader and a very long, dark, curved fin. In the Miss Colleen, he had landed a thresher just a week prior and knew two in a row was exceedingly rare. With everyone positioned, he passed the big 50 forward, set the flying gaff and brought her portside for a tail rope. Everyone worked carefully, quickly and precisely, knowing just what an angry shark can do with teeth and tail. 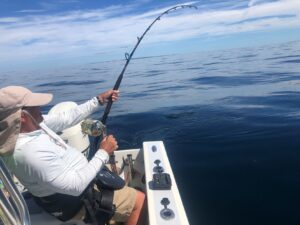 Phil fighting the good fight. For an hour.

“The fish came up and all were surprised.  It was another thresher and measured 11 feet 4 inches and weighed about 325 pounds. We were using a 16/0 circle hook, with 3 feet of wire and a 12-foot 400 mono leader,” Vespe said.Twenty minutes on, all hands helped haul her 300 plus pounds over the port side then all hands clapped as relief washed over everyone and the wash down hose was turned on their giant catch.  On the tape, she was 74″ to the tail fork and 136” overall. 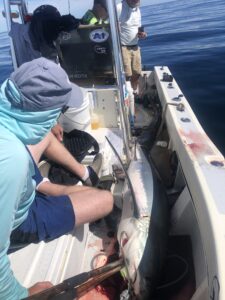 Thresher in the boat

Steaming home with a course of 305°, Miss Colleen’s crew, now dubbed “Team Heavy”, passed Brenton Reef through a slight southwest chop, enjoyed a well-deserved bragging lap around Mike Littlefield’s Arch Angel charter boat, dodged a parade of sailboats and eased back under the bridge, with a long grey tail hanging over her rail. 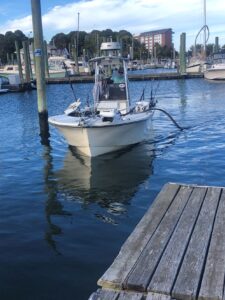 Almost home, dragging a fin off the port side

“She’s a little heavy for sure, but the Miss Colleen came through again,” Greg laughed. 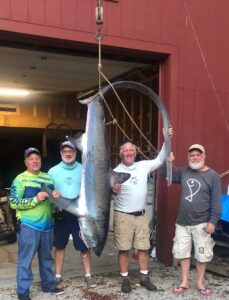 talk about a cast of characters

So when all was clean, we prepped the fin to make some art. 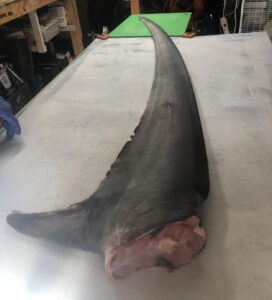 on the table, ready for paint

I called in the best, my favorite mother in law, Susan Costa.

We cleaned the fin, applied a layer of paint and vary carefully made a series of prints. Handling a 78″ fin was no easy task, especially when you really only have one shot at each print.

Two of the three impressions

And in the end, it looked pretty fantastic. Thanks Suse. 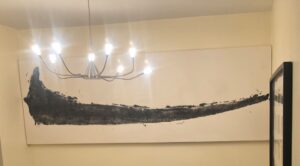 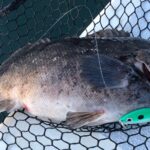 “He can fish from sun up to sun down”, Paul Lavoie said of son, Andrew. He started fishing competitively at four. He’s the Rhode Island Bass Nation Angler of the Year, for the third year in a row. He finished fifth in the country at Tennessee’s Bassmaster Nationals...
Keep Reading

When Steve Medeiros passed, many anglers never knew how how passionately he worked to protect their sport and that was fine with him. The founder and President of the RI Saltwater Anglers Association, he ws considerate, determined, steadfast and a friend so this week, we give thanks for his legacy.

One last shot of ice for the year

Southern ponds had largely thawed. Only Maine and points north still had solid ponds. Spring be damned, we needed one more day on the ice, so we got the band back together, sort of. We assembled nine die-hards: three sharpies from Connecticut, the two owners of Al’s...
Keep Reading

So a guy walks into a bar. Let’s call it the Wakefield branch of the Department of Motor Vehicles. He orders a drink then the nice lady behind the counter refuses him. “But I want to buy one, ma’am. I have money and paperwork showing I’m legal," he protests in vain. A...
Keep Reading