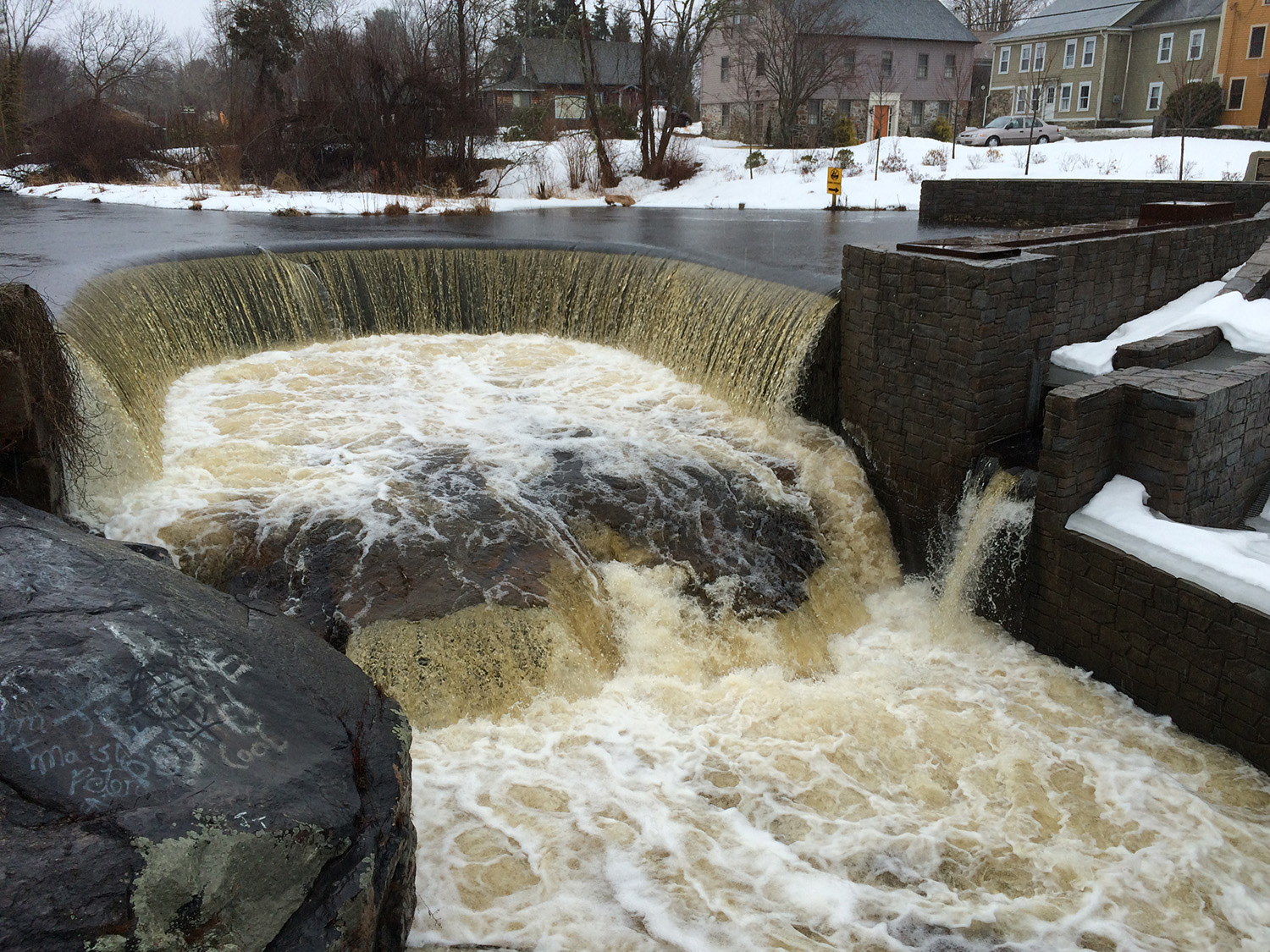 Not everyone could be totally pleased by tearing down a dam.

For many years, dams had significant positive effects on communities alongside and along ways away from the moving waters and fish passages they negated.  Dams generated power to light homes, cooled coal-powered power plants and created motionless lakes so people could waterski when they weren’t otherwise enjoying the semi-utopia created through unmitigated ecosystem imperialism.  They powered cotton mills to produce uniforms, clothing and blankets while they opened the gates to new opportunities for industrialization, commerce and transportation. For the last 30 years or so, people have started standing up for taking dams down.

The RI Natural History Survey recently held a showing of the film “Damnation” at the Richmond-Carolina Firehouse. Produced by Patagonia, it tells the story of how America’s attitude for and even love affair with dams is eroding in light of a new understanding of the complexity of problems they have caused up and downstream. American’s love to get lost, especially in the woods, in places where there are fish to be caught, where the natives are animals and you have to leave a road to get to where your own path takes you.  Loss of critical fish habitat, loss of historic fishing grounds, loss of recreational waters, even the loss of a simple and sadly rare ability to be somewhere else, aside a river, in peace with your surroundings; these were the heavy and common prices paid for progress dams meant to provide us.

We don’t have the type of massive concrete structures like they do out west, but we have many river impediments, remnants of different times and priorities. In New England alone, there are an estimated twenty-seven thousand run of the river dams over three feet tall, partially or completely obstructing moving waters. As recently as 2011, there were 671 dams in Rhode Island and according to Save The Bay, 180 are classified as high and significant hazards. Generations after their creation, some certainly have historical importance. Slater Mill, in Pawtucket, whose Algonquian name means “place of rushing waters”, sits on the edge of the Blackstone River and is a classic example of our historic work ethic. The lower 4 miles of the Blackstone still has 4 dams blocking anadramous fish passage. Like many things in life, some dams have outlived their usefulness and need to go.

The film deals mostly with major dams but it made me think about our own waters, how we may have forgotten about the shad herring and salmon which were here long before we sailed into town. If you took Shannock Road over to Rt.112 to the firehouse, you moved along the Pawcatuck, which itself remains impeded by as many as 9 dams, and some of her tributaries, like the Usquepaug, the Beaver and the Pasquiset Rivers. This road is what William Least Heat Moon would have called a blue highway, a road more overlooked than not, that offers far more than just a way to get somewhere. It follows a fine long river full of history and fish. 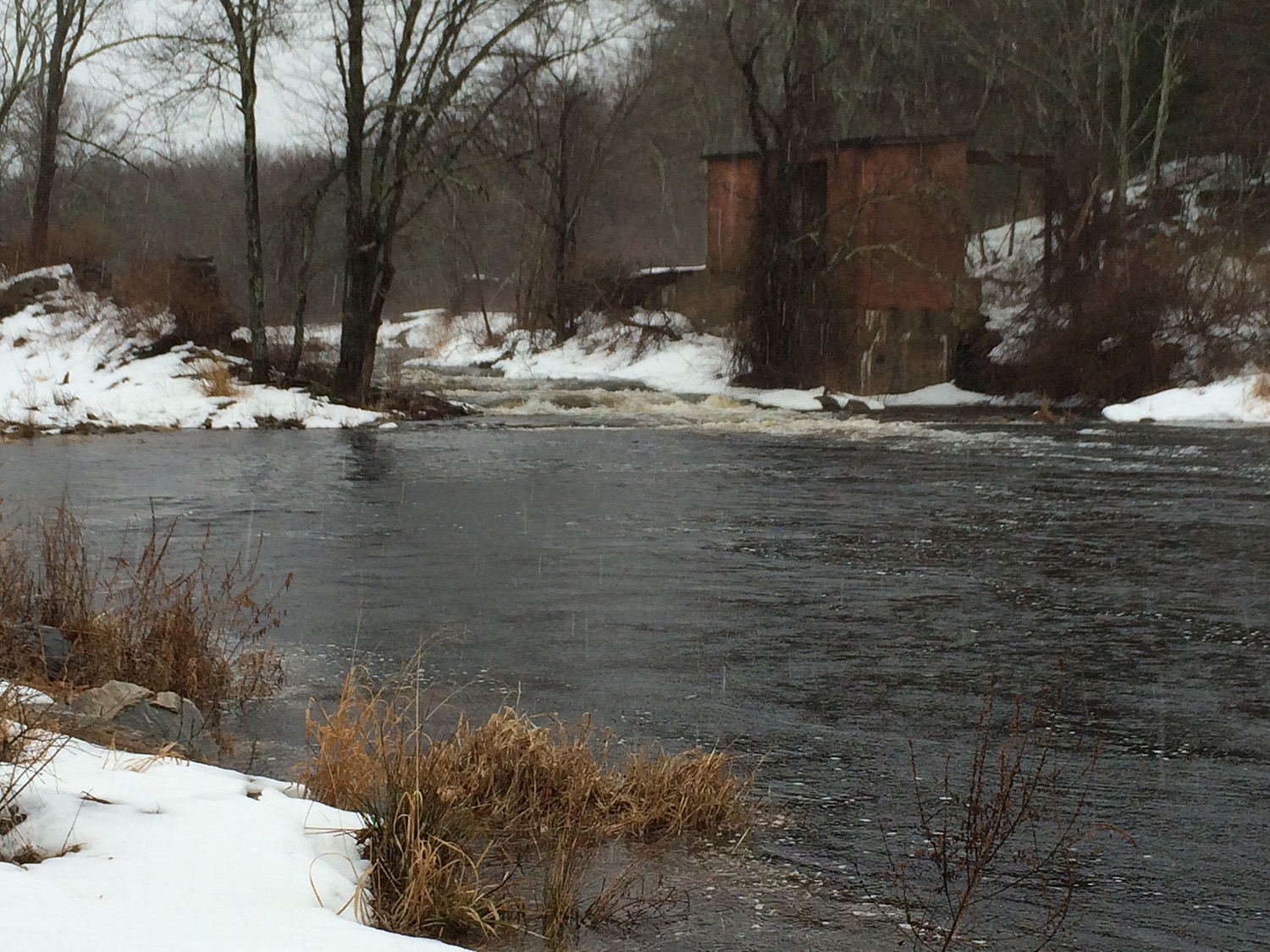 In “Damnation”, there are gorgeous scenes of rich, dark, green forests and sunlit pools of thick pink Pacific salmon. We see great yellow machines tearing through cement and iron, restoring movement, releasing one hundred years-worth of black sediment, desperately needed by the lower river to replenish banks her and mouth, once again allowing canyon walls to feel the pulse of unrestricted water. Vibration is what tears down concrete so we can hear the ancient vibrations of a free river.

To the people’s credit, advocacy groups like the Wood-Pawcatuck Watershed Association work diligently to protect what we have with an eye towards improving and restoring what once was. During the question and answer session, one gentleman kayaker asked how removing the White Rock dam in Westerly would affect the occasionally strong and very fun rapids there now. This very local question is at the heart of all the conversations. With the age of industrialization based on river power in the past, with our scientists, watershed groups and eager volunteers so focused on the significance of rivers and the biodiversity which depends on their health, some just want to paddle down them and get a face full of water as shad and buckies swim below.  That’s just the way a river and its people are supposed to flow.

When dams are created to serve a singular purpose, say power generation, construction will supersede other uses, species, sceneries and very often, discoveries on that land we had not yet made. In areas where rivers are examples of Nature’s unbelievable resilience and determination to outlast our shortsightedness, there is still time to undo what was done. It is a resounding message in this film that Nature has always continued on her path and if we open the way again, she will return.

Alewives and blueback herring have returned to our fresh water rivers for thousands of years, continuously knocking on dam doors under bright spring moons, even though some have been shut for two hundred years. Fish ladders generally work, volunteer netting is a supreme exercise in community support, trucking fish from one river to another seems fine, if you don’t get hung up in the man-hours, scheduling, fuel costs, vehicle repairs, fish stress, etc., but it is Nature who knows what is best.

Moving on should not lead us away from our past. Determining degrees of importance when dealing with iron or power or fish is difficult work in a new greener world. A few metal picnic tables and a brown sign, marking the granite block dam which used to be there will be far more beneficial to a stifled river and its town than a sagging reminder of what we created to produce something we no longer need.

The point is we have, in support of many ventures, ignored or knowingly trampled over many natural rhythms that we are now just starting to acknowledge and communities are balancing what exists with what they want to return. In the fine words of writer David James Duncan, “You cannot have a creature come in from the ocean and enter the extreme state of vulnerability that is spawning in shallow water unless the people of that watershed agree to greet this wild creature with great compassion and sensitivity.” It’s time to reconsider our dams.

Patagonia, Daiwa and St. Croix have new gear for a newseason but it’s Yvon Chouimnard’s announcement that make the biggest news. He has decided to help, once again, save the earth we keep trashing by ensuring his company and legacy are protected as conservationist. Read more about his decision this week along with a release of new Daiwa largemouth bass jigs and new beautiful St. Croix rods. Thank you Yvon Chouinard.

The salt pond was unusually crowded with boats this past weekend. Not enough to require a “Knock It Off!” visit but far busier than expected. The physical and emotional lockdown we’re experiencing requires us to still have some outlet like hiking or fishing or even...
Keep Reading

Team Heavy’s back to back threshers was an unreal adventure in a small boat twenty miles from shore. Greg has a keen eye for the best bottom, the right gear and most importantly, the right people to have on the boat. Read all about a giant thresher this week and then see how, with a little help from my mother in law, some are was added to the wall.

This week, we start a new mini-series called “What They Know.” Over the last many years, Fish Wrap has been blessed to meet and learn from some of the best people in outdoor sports. With Chris Wood, Mr. Bass, Don Barone, Bob Buscher, Greg Vespe, Mark Eustis, Dennis...
Keep Reading