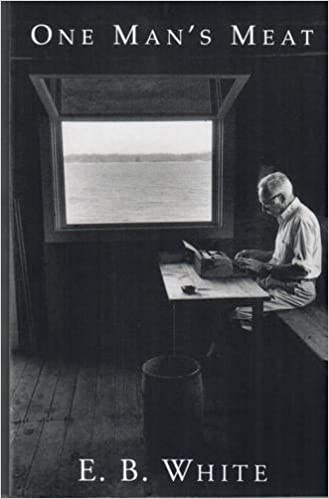 Inspired by my endless enjoyment of e.b. White’s “Memorandum,” from a favorite book and gift of my young son, 1941’s One Man’s Meat, I offer a fishing man’s memorandum for Spring.

Today would be a good day to organize my boxes of lures. Most are stored in opaque plastic cases on shelves sagging for need of repair or at least new nails at the far end of our shared shed which I don’t share well, stacked five high, all labeled with green tape and names. I really should start removing rusty hooks first, out of round rings and bent snaps, then replace them with new hardware.  But first, I need to drive to the tackle store and purchase some new hardware or find the catalog which allows for delivery. That wait will allow for addressing last season’s scratched and chewed lures, abandoned in unfortunate, confused jumbles on my garage workbench, seven inches high.

I should rearrange that workbench first, since that’s where I’m supposed to be winding 50# fluorocarbon around black swivels and hard snaps that cut into my thumbnail, then trimming tag ends with nippers which never work because they were meant for tippets not nails.

It has worn paint marks here and there for assuring correct lengths of leader but they suffer from time and Rorschach remnants of spilled beer.

There are a few dozen jig heads hanging from a red plastic screwdriver holder, celibate of their soft-bellied partners, along with a few more treble hooks never stored properly in the small plastic chest of drawers I bought just to hold treble hooks. Slouching against one garage door are the large scraps of marine plywood I saved to build a fillet table because having a table would make cutting stripers or blues late at night much easier as opposed to using my tailgate, which seems to claim small pieces and large scales to be dug out days later when their effervescence has overwhelmed, or cutting on top of recycling barrels which is wrong for a host of reasons, so that should get assembled today. But first I will need to buy some stainless screws from Jerry’s Hardware and before I take the truck into town, I should take off the blue foam edges I found on the side of Route One south that I duct taped to my tailgate then pick up some pine to build a real rod holder.

This would be a good day to get the fluke rigs from the cellar. They’re all in proper pickle buckets but should be in the shed where there is little room as it is tight with deck chairs, yellowed mosquito coil boxes and brittle yard torches which never have fuel and always fall over. I also should send an email to Kevin at On The Water magazine, as I am a year overdue on a story of paddling the Allagash with a best friend and a young son and ample stores of beer. That was quite a trip and will make for a great read but first I ought to repackage my tiny bubble gum lures for a Spring worm hatch and call my good friend Guy who can tie any fly to see if he has something for the hatch. Pink is my favorite but does not always produce, which reminds me that I still need to manage a spot for a fly tying desk. The living room is the most logical place but reason, history and my wife are against me. It would be fine in the southeast corner by the big door but for three weeks that is where our Christmas tree discards its needles, which somehow usurps those forty-nine other weeks of potential, like sitting at a proper fly tying desk.

I really should also take out the tautog racks I saved for stock but never brought to the pot, and turn them into the compost. Ashes to ashes. At the bin, I should also take in those old rakes and shovels whose handles have cracked worse than farmers hands when often both are past repair. It seems a shame to toss an old handle to the woodstove after so many years of fine service but kindling is always needed so I’ll bring some in first then go back with the compost pail. Walking back past our canoe rack, which really is solely mine, it’s clear both boats and their supports are calling for attention. I should first order the new ash seats for my Old Town Guide canoe.

Previously I cleared out both broken ones, along with the yoke, and repaired the small cracks in her keel. She should be ready for a June river voyage, although I am reminded you can paddle from Vermont to the sea but not from Worden Pond to Westerly, that is, unless you want to Lewis and Clark your way around all the dams. That said, it’s time to call the state today and ask about any celebration for that new fishway at the Old Post Road dam in Wakefield. Something surely must be planned for its completion and welcoming of alewives and blluebacks, one of so many solid Spring miracles.

Over the sink where we keep the pail is a fine picture of my young son with a young bluefish which reminds me I really should take from the freezer some bluefish which came from Mike Doyle’s boat, Charlie’s Pride and was brined dried and smoked just a month ago. Smoked fish would serve nicely on a cold day to remind me of warm summers and fishing from a small boat with high sides in a school of frantic fish. Those moments of bounty balance off the many when there were no fish. First, I ought to finish hanging more pictures of my young son with all those great fish kept or released. The wall is very full so perhaps I should take down one of my wife’s posters of London and start creating space for more framed fish. Really I should rehang the rods which have fallen from the living room wall above the fish pictures. They look fine over the bar and are safe from the elements but never were properly secured and have frightened each member of my home, including our dog, on various occasions as poorly chosen four penny nails failed under such weight as a ten foot Ron Arra Surf Pro might incur. I also ought to build a new holder for all the rods in the shed; they are poorly piled on a repurposed rifle rack regifted by an uncle who replaced it when he rejected it after several repairs. If the rods were better organized, I would know how many I have, how many are working and how many should be put to rest but there is real pleasure in not knowing everything.

Today I should invite Mike Yarworth over for the annual gear night, our favorite winter ritual toasting a new spring with old stories. Cleaning reels in a green plastic tub of warm water, lightly soaped, restringing spools with fresh braid or monofilament from crisp squares of glossy black packaging, even gluing on new fluorescent fish eyes is less about the parts and more about the pieces of time that are quickly passing.

Tomorrow is Monday so I will have pavement to patch or shoulders to mow for work, so first I need to deliver my writing on time so I ought to finish typing so that I can get out the one catalog for those ash seats and another for some new eel hooks and then see if any bluefish has defrosted enough to enjoy so that I can sit at a proper desk and start writing about the Allagash.

Thank you Mr. White, your inspirations move me brightly.

dads, harpoons, sharks and the Mayor of Charlestown

Striped bass, fluke, tuna and shark fishing are all getting better, much better. Along South West Ledge and the island’s south side, the bite continues to improve with plenty of bait to be found. Sand eels have been seen along the Narragansett shoreline with lots of...
Keep Reading

These weeks of spring have a very special early morning light. It shines for just a few minutes for just a few weeks and then it’s different. Not better nor worse, just different.  We wait so anxiously for summer and those long days but her light is fixed for months....
Keep Reading