It’s summer, it’s muggy, it’s crowded in South County. Up in the Great State of Maine, there are smallmouth feeding heartily all along the Penobscot River, where local governments understand how many of those dollars are spent by sportsmen and women and no one gets squeezed to park a car. So we went way north last week, where cell and internet service are, thankfully, spotty at best. Phil Capaldi took over the pen, offering his spin on what’s happening on the water, without my typical sarcasm and relentless badgering for annoyances, like paying to park at a town beach.

All ahead stop in the North Maine Woods

Thank you Phil, for your hard work, research and willingness to go fishing as much as possible to support the fine Fish Wrap tradition of truthful-ish stories and reports. Ladies and gentlemen, Phil Capaldi.

Finding a 19 inch plus “keeper size” fluke still has posed some difficulties for many anglers this past week. But those who have decades on the water have offered up a few tips. Rhode Island Saltwater Anglers Association (RISAA) member Bob Onosko has met with success baiting his homemade fluke rigs with mumichogs and a strip of squid. I, on the other hand, like the mumichogs but swap out the squid for a strip of fluke belly skin. Bob’s confidence and success landing fluke has increased using an additional light bucktail teaser. Bob’s teaser of choice is Tsunami’s Glass Minnow. Bob adds the teaser during this time of year to his own custom fluke rigs. Sorry folks, he was off the record when he showed me his homemade rigs. I was sworn to secrecy and simply cannot reveal the color combinations to his rigs. Getting your hands on terminal tackle has been tricky this past year, so keep your eyes peeled for the Shimano TR. This level wind is a workhorse and should be added to your fishing arsenal as soon as possible. Topwater action for blues and midsize striped bass has been increasing in waters from Newport  to Westerly. 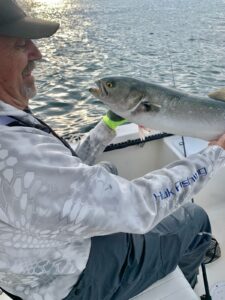 Phil Shea introduces himself to a young bluefish

Minnows and pencils to put you on fish

Phil Shea, of Mansfield, Massachusetts, and Bill Day, of Narragansett, Rhode Island, recently had an exceptional topwater bite. Bill Day is addicted to the Yo-Zuri line of plugs. This past week the Yo-Zuri 3D Topknock Pencil has been explosive in landing fish. The most productive coloration within this line of lures is bone. Phil Shea can’t say enough good things about the 4 inch Queen Cocohoe Minnow from the H & H Lure Company paired with a half ounce jig head when targeting stripers in 20 feet of water. Sure it’s a swimmer, but he often out fishes the others just before the topwater action starts. Dave Sweet of Narragansett has been keeping a secret in regards to another incredibly versatile lure. 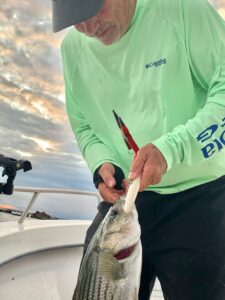 Dave can be seen using a Tony Accetta #14 metal “pet” spoon. Dave has caught a variety of species of fish using this lure. Stripers, sea bass, fluke and scup to name a few. As advertised on the original 1940 packaging, the Tony Accetta “pet” Spoon “gives you the advantage of 1001 baits.” 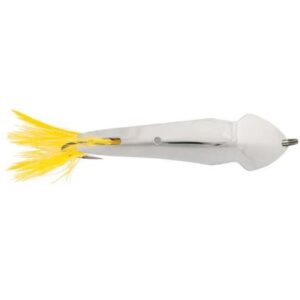 Have you taken the drive down to Charlestown to see the recently renovated Quonnochontaug Breachway public boat launch? It is a great place to launch to reach those spots around the southern shore. This public launch was partially paid for by you. A portion of your recreational license fees go towards the improvement in public access to coastal waters through the Wildlife and Sportfish Restoration Acts. Joining the Rhode Island Saltwater Anglers Association is a great way to stay current on matters that affect your ability to fish in RI waters.  There is a tangible feeling about being a part of something larger than oneself. You get that feeling being a member of RISAA. You also get that feeling participating in On the Water Magazine’s annual Striper Cup. Every week there are new chances to win great raffles. Check out the excitement at www.stripercup.com.

See you on the briny!