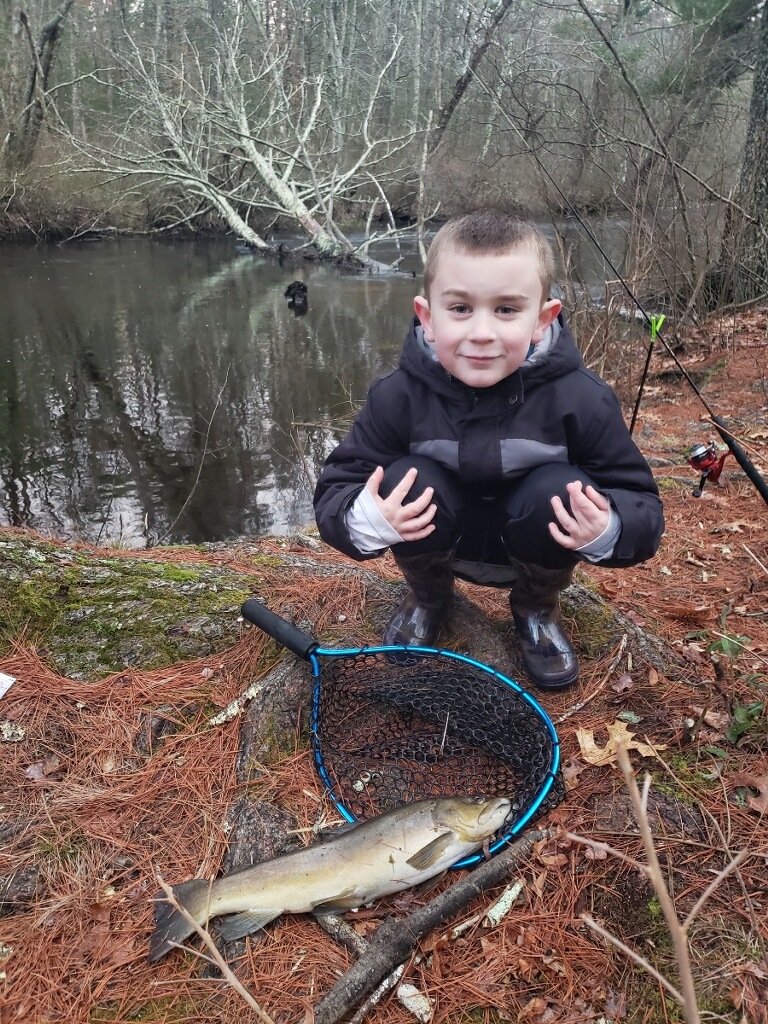 Paul Pezza sat comfortably in a Check Station folding camp chair. Gunnar Wec stood confidently on the banks of the Wood River. John Graichen held court by Tiogue Lake. Young James paced a South Kingstown kids-only trout pond. And the masses lined shorelines state-wide to land a first-of-the-the season trout on April’s second Saturday. It’s a generations-old celebration of pitch-black car rides, respect for a 6am start, a tug of the line, and breakfast with bacon and stories. Spring’s greatest day for many, means different things to different folks and all have great value. How do you value opening day, well that conversation requires some imagination. 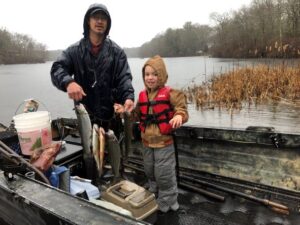 A fine string of trout

Son of a true outdoorsman, five-year-old Gunnar is being raised in a family who respects our environment while taking full advantage of all it offers, so opening day with his dad preserves something of immense importance. Bringing home a fish or watching one swim away are equally valuable milestones for our youngest generation who are spending less and less time outdoors.

John Graichen’s Keeping Kids Fishing program is a force of charity showcasing his passion for gifting fishing gear to any child or parent who asks. Standing by a busy Coventry lake, he shared with opening day crowds because he cares. 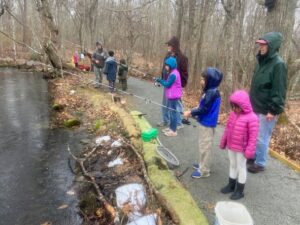 waiting for trout at a SK Land Trust Pond

James cast over long maple branch bellies at the Scott Evans Memorial Pond as friends and family supported his first experience catching and releasing. Over at Barber Pond, speckled with Power Bait, there was a line for the Port-A-Jon. What connects all of these experiences is stocked trout. 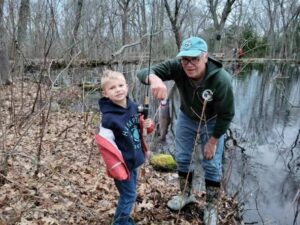 Proud Grandpa with an young James

As the Wood River trickled slowly past a busy Check Station parking lot, Paul Pezza, Brian O’Connor and Martin Custodio, the heartbeat of Protect RI Brook Trout, shared pepper biscuits, waiting for trout fishermen or women to ask about Brian’s beautiful diorama calling for an end to stocking hatchery raised fish over native populations, as the State practices in the Wood River. So how do you value opening day?

How much do you value native trout? 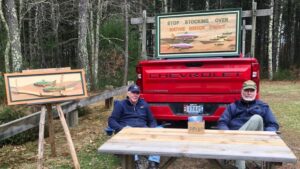 They were advocating for an end to stocking in several fragile waters and for some final recognition that Rhode Island is privileged to have populations of wild brookies who need protection right now. They spoke of thermal refuges, impoundment removal, hypoxia, stream channel enhancement and restoration. They spoke but on opening day, surrounded by folks wading in line for stocked trout, two species of which are invasive while another is a freaky genetic amalgamation, no one was listening. They held their course while a parade of out of state cars with fly rods hanging on tailgates and wiggling on roofs, passed them by. 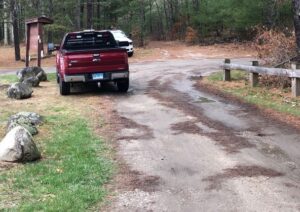 They didn’t stop to listen or park in a spot that didn’t block the road. That’s opening day on the Wood River

Some 25 miles of historic trout waters with gravel bottoms, easily accessible stretches and a sacred few reaches where a persistent few pools of wild brook trout cling to cold water seeps and last gasps at preserving their lineage, The Wood is a serious draw for anglers, many of whom purchase licenses with hopes of catching a fish, regardless of where it was born. 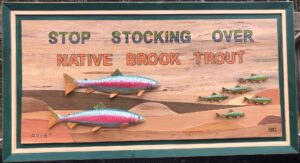 Over the years, we have heartily advocated for an end to stocking hatchery raised trout over wild stocks. This is not the same as calling for a cessation of stocking.  As we humans learn and understand more about how hatchery fish can cannibalize wild stocks, outcompete for food and even cross breed to dilute gene pools, we might reconsider the value of one over another in some waters.

We met PRIBT many years ago

Stocking means nothing to kids with pink and blue poles from John Graichen, who just want to catch something and move onto more bacon. Invasive is likely not a word in James’ vocabulary yet, but it will need to be if we have any hope for protecting wild fishes. When Gunnar steps up to the Wood with a four weight in five years, will he catch only hatchery fish with weak genetics and a taste for pellet food, or will he savor the hike, the ask, the challenge of possibly one fish released beneath a stand of sagging maples on the Beaver River? 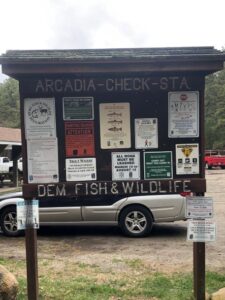 As a smiling young fisherman strutted across the Arcadia Check Station parking lot, with only a shriveled earth worm dangling from a hook, I wondered how many of us were him back when. Will our kids ask about conservation, wild fish, impoundments, refuges, seeps or properly releasing fish? Will they learn about steelhead anglers presenting streamers without hooks to simply feel thrills of pulls and harmless releases to protect fish they love? How we value fish and their habitats is surely changing and part of that conversation includes stocking. I wonder if our kids will ever find wild brookies if we keep undervaluing them?

Fishing license sales benefit our state with a 3-1 dollar match through the Sportfish Restoration Program to support the, “conservation and restoration of sport fish species and their habitats.” Paul Pezza recalled a meeting when a senior RIDEM biologist could not recall how many fresh water licenses were sold the previous year. So maybe it’s not license sales and matching money that drives the hatchery truck, it’s tradition. A little sleep, sticky yellow baits, golden trout for a lapel pin win. Pop up a camper, poke a fire, eat bacon, watch your watch for 6am. Be so excited at five years old to maybe catch a trout that you can’t sleep at all. Raise fish, unload fish, take fish. 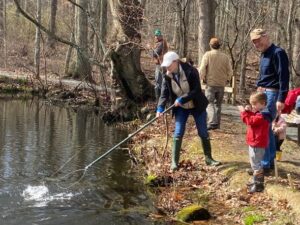 Will we have a tradition of seeking wild, native trout one day?

Trout fishing is all about traditions but maybe it’s time to reconsider which are more valuable than others and maybe it’s time for some waters to be left out of the hatchery tradition. Chasing rainbows in a Land Trust pond is a shining example of Spring’s Greatest Day for sure. A six hour hike through upper Beaver River brambles might not encourage a lifetime of devotion to wild fishes, especially for young children, but as Sir John Pratchett wrote, “Imagination, not intelligence, made us human.” 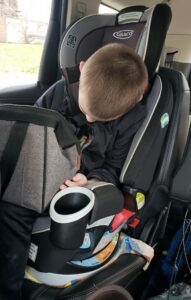 Gunnar, out. Drop the rod…