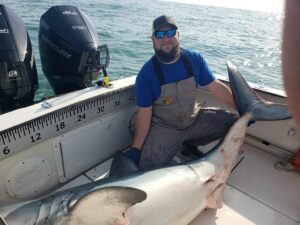 The fluke bite has been slow and based on the last few years, getting slower. Most reports from pressured points in Narragansett Bay, like the bridges, Austin Hollow, Bailey’s Beach and other southern reaches have been yielding only consistent shorts with the occasional keeper caught on a Gulp! strip. Of course, the obvious exception is the 15.24 pound beast caught by Greg Vespe while fishing with BJ Silvia. 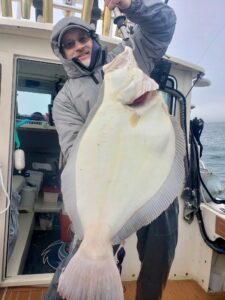 At 31.5” long, it was a fish of a lifetime. The rest of the state is picking away along South County beaches and in shallow water around Block Island. Islander Martha Ball once corrected me, and it only took one time, that you can’t go around the block. Sage counsel to a guy who earns at least a partial living with words and should know better. Most people are switching to black sea bass or stripers.

Black sea bass are as prolific as ever.  Earlier this year, NOAA reported studies from Connecticut’s Milford Lab showing clear increases in numbers of juvenile black sea bass and oyster toad fish around Long Island Sound and one common denominator seems to be water temperature. “Publicly available long-term temperature records collected at the Milford Laboratory document 50 years of gradually increasing water temperatures in Long Island Sound’s central basin. Both summer and winter temperatures have been on the rise since 1965.” That’s just to the west and they also determined that many of those black sea bass and not migrating, they’re staying right around here.

Stripers and sharks near Block Island

Stripers came on strong at the beginning of the season, went north to the Bay and her tributaries with the squid and remain in large numbers there. Block Island has seen some big fish taken from below the Southeast Light and on the ledge but not dramatic numbers to which we were accustomed. Southern salt ponds will hold bass right up until about now, when waters get bathing suit warm but Point Judith Pond has deeper stretches and will keep bass all year round and the bite is right at night. Some decent bass are feeding at the mouth of the Sakonnet River, falling for tube and worm setups. Now there are thresher sharks cheating Narragansett out of beach fees as they patrol shallow water and size up some surfers enjoying yet another day off.

Mackerel have been busting in Galilee harbor for the last few days, feeding on small bait and tasty comb jellies. It seems early for their arrival but in a world of diminishing returns, let’s celebrate this all day long.

The kayak crew is still finding bass around Brenton Reef and in the upper Bay while Narragansett and South Kingstown action is pretty, darned, slow. Congratulations to kayaker Todd Treonze who peddled his way to winning week nine of The Striper Cup. Well done Todd and we know you’ll put that new Penn Battle III 4000 spinning reel combo to work on an even bigger bass.

Then there’s Mike Wec. He doesn’t miss a chance to get on the water, fresh or salt and this week, he landed his first shark. Mike estimated the porbeagle weighed between 350 and 400 pounds with a length of more than 85”. He was quick to give thanks to  Capt. Dom Petrarca of Coastal Charters Sportfishing, “For a hell of a trip!” and to the crew, “For the guidance and patience it took not only to get this beast in, but also for all of the knowledge and laughs throughout the day.” The best part may be his admitting, “I feel like I got hit by a bus today.” That’s a hell of a way to celebrate Shark Week. 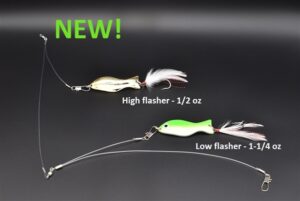 Over the years, we’ve watched Mike catch trout, largemouth, stripers and fluke on his custom designed “Wicked Wec High Low” fluke rig made by Maine’s Al’s Goldfish Lure Company then trade Grundens oilers for Carhartt jackets and bring home turkey and deer. A tip of the camo hat to a true outdoorsman.

Finally this week, the tuna bite is almost epic. We can’t really say it is epic, lest we get corrected by those who remember bigger years. That said, the Gully, Tuna Ridge and points south are packed with Bluefin tuna and boats. There have been several reports of people landing tuna on their first attempts with spreader bars. And there are giants. Giants feeding below all those footballs, looking for fatty meals like live bluefish.

Before you gas up the center console, you’ll need a permit. The RI Saltwater Anglers Association posted a helpful reminder stating, “NOAA Fisheries requires fishermen and dealers to obtain federal permits if they fish for, sell, purchase, or import Atlantic highly migratory species (HMS), which include tunas, billfish, swordfish, or sharks.” Rich Hittinger, RISAA First Vice President stated, “How many Bluefin tuna can you keep and what size? Private boats are allowed 2 tuna over 27” or 1 over 47” and charters are allowed 3 or 2.”

If you go to the NOAA Fisheries webpage, there’s a compliance guide to help you not get in a jam when you’re going around the block.

On Patrol with RIDEM Law Enforcement

RI Department of Environmental Management Environmental Police Officer Mike Schipritt was again gracious enough to allow us to shadow a patrol, as we did last summer. For this patrol, we joined Marine Unit officers Jeff Mercer and Kevin Snow at their Wickford station,...
Keep Reading

Wild Rivers and Walling People Out

This Saturday looks to be a very busy fishing day. A thousand or so fishermen, boaters, kayakers and lots of good people will pour into our coastal waters for the Green Hill "Fluke Till Ya Puke" Fishing Tournament. Headquartered at Point View Marina in South...
Keep Reading

Women Who Choose to Lead

Celebrating at URI’s Mosby House, I learned the joy of being with women who choose to lead on the day our courts erased their right to choose. Some days it feels like our country is burning but some other days, we are blessed by the company of people who simply amaze us.