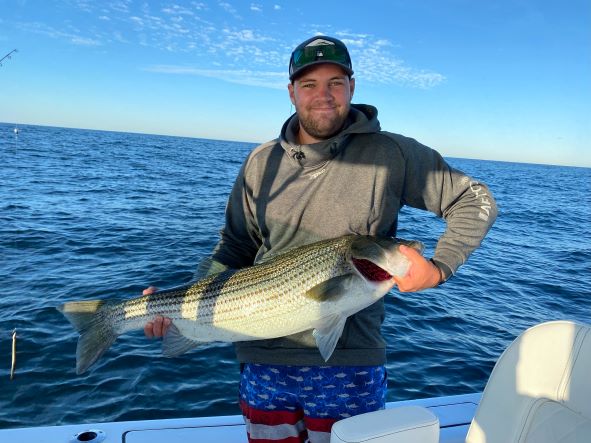 There seems to be no end to the fireworks. On Narragansett Bay, salt ponds and fresh waters, stripers, fluke, black sea bass and largemouth bass are being caught, released and occasionally grilled with lemon as we celebrate our country’s independence. How fun to celebrate fishing fun all around while big cheers can be heard from all points of the compass. 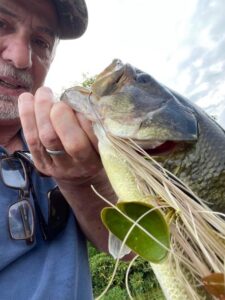 Bob Buscher getting it done in the salad

With sweet water temperatures in the seventies, largemouth bass have been seeking shade and camouflage. Our good friend Bob Buscher, a master at mixing and matching patterns, colors and styles to draw the biggest fish out for a look, is targeting the salad of invasive milfoil and lovely lily pads, dripping with warm water. Mr. Buscher is on fire. 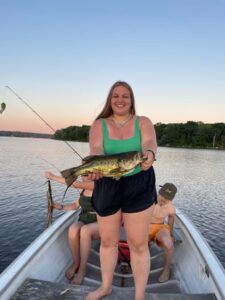 “Top water is starting to heat up. The Heddon Zara Spook Jr. is on right now,” Bob said. I never met a Heddon lure I didn’t love.

He added, “If weeds or pads are too thick to walk a spook, the Booyah Pad Crasher frog can also be walked through the thick stuff. Remember, always have a soft plastic tied on another rod like a Yamamoto Senko for missed blow ups. Throw it right where the fish missed the frog within 5 seconds and you will catch that bass.”

Speaking of lily pads, scientists have identified a new species and this one, the third in the genus Victoria, is the world’s largest. 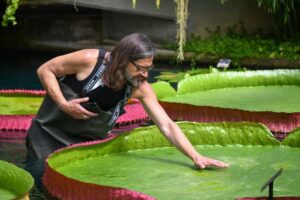 The nighttime blooming V. boliviana measures almost seven feet across and appears like something on the set of Charlie and the Chocolate Factory. According to the American Association for the Advancement of Science, “Botanists both at the Royal Botanic Gardens, Kew, which has had a living specimen of this plant for 177 years, and at National Herbarium of Bolivia, which collected its own specimen 34 years ago, wondered whether it might not be V. amazonica or V. cruziana, because the shape, color, and size of its leaves, flowers, and seeds seemed a mix of the two species, particularly after a botanical artist documented those differences when she illustrated the 2-day flowering of these nighttime bloomers.” Some days it feels like the world is burning beneath our feet and some days, we are reminded how cool our natural world really is.

Once again, Jason Anctil is just one bite away from the biggest fish

In July, we celebrate anglers new to Fish Wrap and many of our favorites

Fish Wrap favorite Jason Anctil managed a day off to get back on the Bay in his new center console. Jason works full time at his job and full time with his family so as much as he loves finding fish, he knows family and paying bills always comes first. Jason, like many other anglers, has found bass, and some really big bass, in the Bay. With fishing fireworks all around, live lining has been productive.

Bill McCusker, infamous for his impressively sad roadside nip collection retrieved from callous people chucking their issues out the window, has retired to the beaches and trails of South County and this week, came upon a deceased Atlantic sturgeon in Matunuck.

There was a time when sturgeon cruised many local rivers. But that’s of course before we dammed so many then put checkbooks back in our pockets when it came  to removing them. Cheers to groups like RIDEM, NOAA and The Nature Conservancy working diligently to reverse that flow. If you have an interest in sturgeon, add “Running Silver: Restoring Atlantic Rivers And Their Great Fish Migrations” to your reading list. Writer John Waldman discusses several local waters where shad, sturgeon, stripers and river herring once were plentiful. It’s enlightening, interesting and depressing in equal measures. Nonetheless, Atlantic sturgeon are Acipenser oxyrinchus oxyrinchus and have a historic Western Atlantic distribution from Hamilton River, Labrador, Newfoundland, Canada to northeastern Florida. They do occasionally wash ashore and have been found a few times near the Woonasquatucket’s outflow into Narragansett Bay.

The Atlantic Shark Institute’s John Dodd, has announced a milestone in shark population restoration and protection. “…Beginning July 5, 2022, the landing or possession of shortfin Mako sharks in the U.S. is prohibited. That includes commercial fisherman, recreational fisherman, and any dealers who buy or sell shark products. The ban also includes sharks that are dead or alive when captured, regardless of the events surrounding them, NOAA announced. The decision has long been supported by shark research organizations that understand the significant issues this species of shark faces.”

With a complete harvest ban, makos have an increased chance of restoring population numbers. If you have a complaint about this necessary step, consider John’s observation. “The issues surrounding the long-term health of our oceans, and the Mako shark, are not hard to understand when broken into digestible components. Female Mako sharks don’t reproduce until they are approximately 20 years old, and 600 pounds. I’ve seen hundreds of Mako sharks and exactly one that size in all my years researching this spectacular shark. It’s amazing that they can even reach that age and size with all the fishing pressure and risks they face, spending decades in our oceans.”

Cheers to that decision. 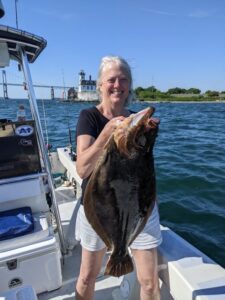 Rhode Island’s favorite, Janet Coit, with a slammer of a summer flounder

Cheers to Greg, Janet, the fine outdoors writer Dave Monti and everyone who went fishing that day. A ten pound fluke. Talk about fireworks. 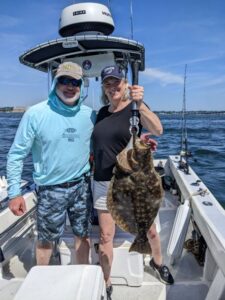 Finally this week, a tip of the camo hat to Fish Wrap reader and historically frustrated striper angler Colby Whaley, who has broken the jinx with a whopper of a striper caught and released near Block Island. Cheers to Colby, who has waited a painful amount of time to land his first, for releasing her. There’s nothing wrong with keeping fish for the table and he certainly worked for that one so I applaud his selfless release. Well done sir and cheers all around to our special part of this great nation. 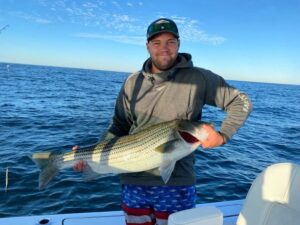